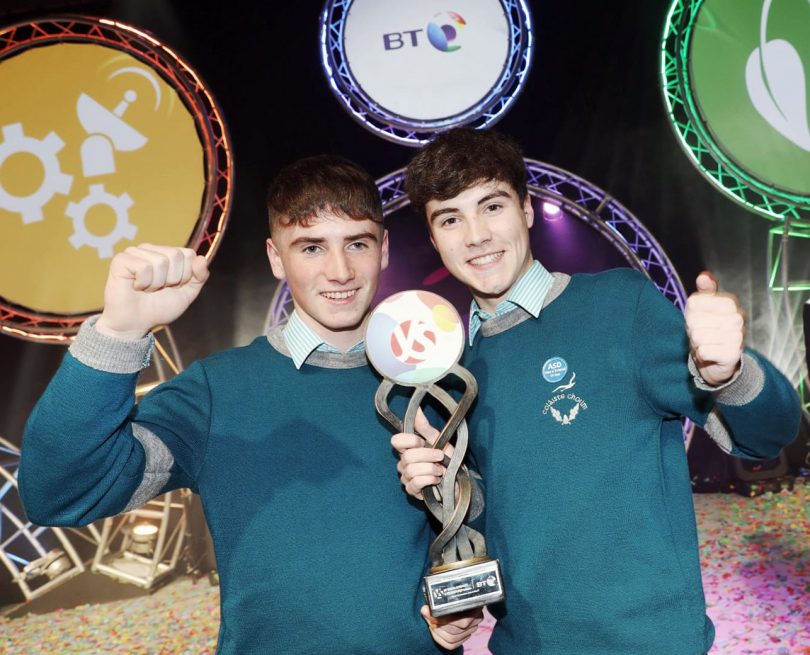 Transition year students from Coláiste Choilm, Ballincollig, Co. Cork, Cormac Harris and Alan O'Sullivan scooped the top prize at the event in Dublin on Friday.
The project entitled “A statistical investigation into the prevalence of gender stereotyping in 5-7-year-olds and the development of an initiative to combat gender bias”.

Head Judge of the Social and Behavioural Sciences Group category, Professor Joe Barry said about Cormac and Alan’s project, ‘Despite awareness of the lower percentage of females relative to males pursuing study and careers in science, technology, engineering and mathematics (STEM), we still do not understand exactly why this is the case. The aim of Cormac and Alan’s project was to determine how early gender stereotyping can be identified. They conducted workshops with 376 5-7-year-olds from a range of school settings with a number of different tasks including choosing between gender-specific and gender-neutral toys; drawing and naming an engineer, and; rating male and female competency at a number of gender-specific roles. One of the most striking findings emerging from the research was that 96% of boys drew a male engineer while just over 50% of girls drew a female engineer. This, along with the other data, indicates that gender stereotypes emerge in young children and that they are particularly strong among boys. Cormac and Alan’s findings are important as intervention typically focusses on girls, but the project recognises the need to focus on all children, boys and girls, from a young age, in order to combat the development of gender stereotyping. The project is particularly impressive in that Cormac and Alan also created very pertinent and useable resources for primary school teachers to combat gender stereotyping among young children.’

The 2020 BT Young Scientist & Technology winners received the BTYSTE perpetual trophy and the top prize of €7,500. The lucky winners will also represent Ireland at the European Union Contest for Young Scientists, which takes place in Santander, Spain in September 2020. Cormac and Alan will also get to attend the 62nd Annual London International Youth Science Forum later in the year.