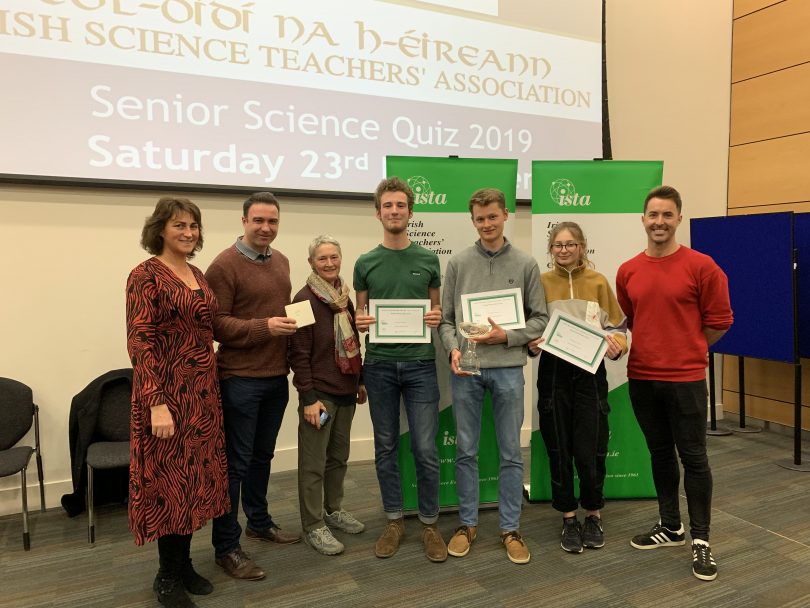 The National Finals of the annual ISTA Senior Science Quiz took place in the Tercentenary Hall in Trinity Biomedical Sciences Institute on Saturday 23rd November. There were 46 teams of Leaving Certificate science students and their teachers, representing 16 counties from all around Ireland. Over 1000 Leaving Certificate students took part in the Regional Finals held during Science Week and the top 138 LC students were invited to the BioPharmaChemical Ireland sponsored National Final. Enda Dempsey represented BioPharmaChemical Ireland on the day.

The winners this year after tie-breakers were: St. Andrew’s College, Booterstown, Co. Dublin.

Thanks to ALL the local coordinators and their teams in the 14 Branches of ISTA who facilitated the Regionals Rounds during Science Week. (Joyce Byrne, Maura Conneally, Lisa Darley, Brendan Duane, Gary Galvin, Yvonne Higgins, Michelle Lyons, Mary McDonagh, Siobhán Mc Cormack, Maria Steinborn, Sam Pearson, Séamus O’Donghaile, Seán Reidy, Maria Sheehan & Brian Smyth). Thanks also to the Dublin Branch of ISTA who organised the National Final. A special thanks to Mark Langtry of RTEJr and Explorium fame, who acted as guest quizmaster.

As always thanks to BioPharmaChemical Ireland, main sponsor, Trinity College who provided the venue. Also thanks to CJ Fallon, Folens, ICI, IoP Ireland, SEAI who provided spot prizes and last but not least the students and their teachers who attended. This year RSC provided Periodic Tables and bottled water was provided by Michael Taylor, Tesco in Waterford.

Congratulations and well done to ALL who participated. The top 10 teams this year were: