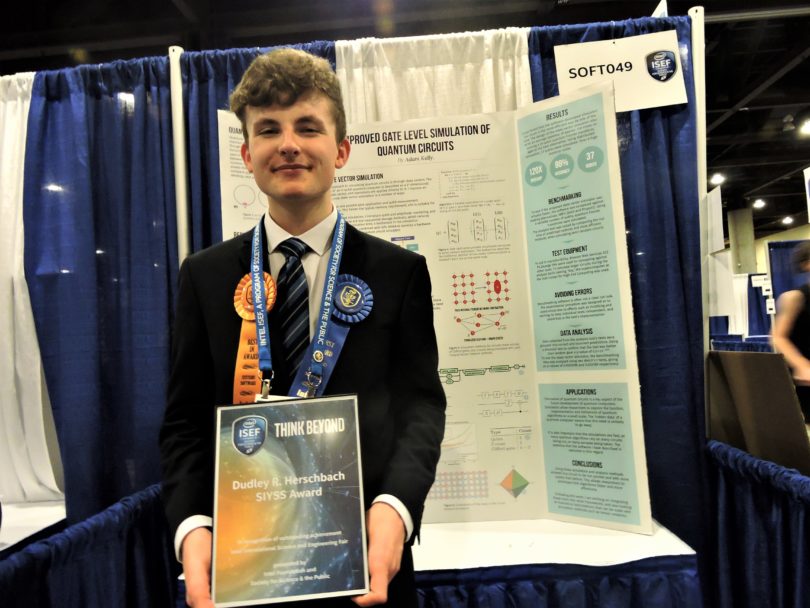 SciFest winner Adam Kelly wins Dudley R. Herschbach SIYSS Award and will have an asteroid named after him ~

SciFest national champion, Adam Kelly from Skerries Community College, Dublin represented Ireland at Intel ISEF 2019 in Phoenix, Arizona in May where he has claimed the Dudley R. Herschbach SIYSS Award, which is considered one of the competition’s top 5 most prestigious accolades. This means he will be one of 25 students who will attend the week-long Stockholm International Youth Science Seminar (SIYSS) and will get the chance to meet Nobel prize winning scientists.  His success did not stop there, he also received a first prize in his category, Systems Software. Adam earns $3,000 in prize money and will have an asteroid named after him as a result. Adam also achieved a Best in Category Award, earning $5,000 for himself and $1,000 for his school.

Adam’s work is a combination of physics, computing and maths, and has huge potential. Unlike a traditional computer that uses bits represented either by one or zero, a quantum computer works off ‘qubits’, meaning an action can be a one, zero or both at the same time. This means a quantum computer can work at an unprecedented speed on vast calculations with applications in fields such as astronomy and climatology.

Large-scale quantum computers are set to be the next frontier in advanced computing, but they are not yet widely available, which is why Adam developed an open source solution to simulating quantum computing that is up to 15 times faster than conventional simulations. His solution can be used by anyone in their own experiments – the software has direct applications in the verification of quantum devices, quantum algorithm design and investigations of quantum supremacy.

Speaking about attending ISEF, Adam said: “I was very excited to have the opportunity to travel to Phoenix and to present my work to some of the top STEM professionals in the world. I really enjoyed meeting young people from all over the world and seeing the different projects that they are working on. This was a wonderful opportunity to share ideas and to learn, and I am so thankful to my family, friends, teachers and everyone at SciFest who have supported me up to now.”

Sheila Porter, SciFest Founder and CEO, commented: “We are all very proud of Adam and his achievement in receiving a first prize finish in his category, Systems Software. Participating in Intel ISEF is a wonderful opportunity and I know Adam has really enjoyed the experience. SciFest is all about encouraging a love of science, technology, engineering and maths among young people. Adam has developed a truly innovative project and we are delighted that he has had the opportunity to bring it to an international audience. We wish him every success for the future.”

Science Foundation Ireland supports SciFest in its programme of encouraging and engaging young people in STEM.  Speaking about Adam’s award, Dr Ruth Freeman, Director of Science for Society at Science Foundation Ireland said: “I want to congratulate Adam on his fantastic achievement in finish first prizein his category, Systems Software. It is wonderful to see a young Irish innovator competing at a global level.  Science Foundation Ireland is delighted to support SciFest, as it is such an effective programme in enabling young people to use science, technology, engineering and maths to create solutions to today’s and tomorrow’s challenges.  I congratulate all of the students who take part for the passion and creativity they show, and the work they put into their projects. Hopefully, we’ll see many of them consider STEM careers in the future.”

SciFest is an all-island STEM (science, technology, engineering and maths) initiative which fosters active, collaborative and inquiry-based learning among second level students. It is free to enter and being locally and regionally based it is both accessible and inclusive.