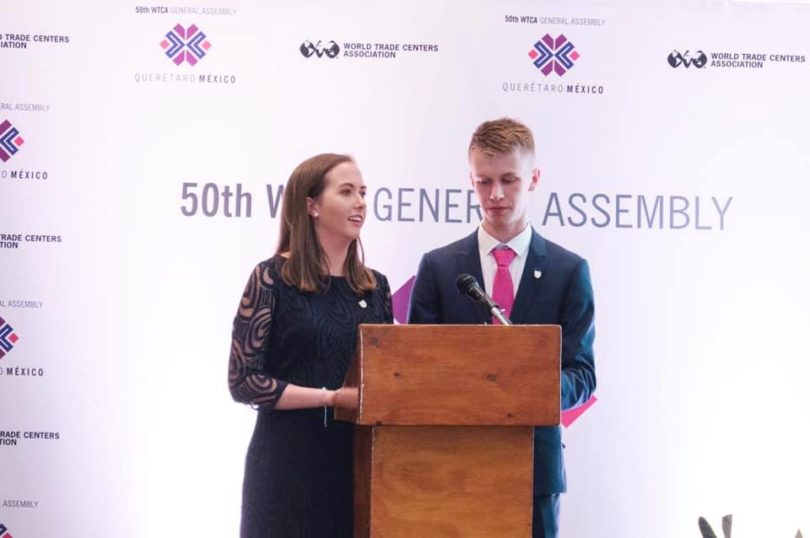 There is no doubt that the Science for Development Award at the BT Young Scientist and Technology Exhibition can take you places. This may have occurred to the 2018 winner Timothy McGrath, from Killorglin Community College as he addressed a large gathering of attentive students and staff at Busitema University in Soroti, Uganda in February 2019. He had travelled to Uganda with his school principal on a trip sponsored by the Department of Foreign Affairs and Trade and organised by Self Help Africa.

Timothy's award winning project was an investigation into the use of CRISPR-Cas9 to genomically edit paramecium caudatum to purify vibrio cholera infected water in developing countries. When presenting his project in the university, Timothy demonstrated how the technology could be developed quite cheaply for use in Africa.

The Science for Development Award which is jointly organised by the Department of Foreign Affairs and Trade and Self Help Africa, rewards the BT Young Scientist project that best addresses a challenge faced by communities in the Global South. The trip to Africa, which is part of the prize, gives the winners a chance to investigate how their science project might have a positive impact on the lives of people in rural Africa.
Jack O’Connor, one of the 2017 Science for Development Award winners, has travelled even further with the project that he developed with classmate Diarmuid Curtin in Desmond College in Newcastle West. Self Help Africa organised the initial trip to Malawi with teacher Donal Enright, where they field tested their ergonomic seed planter. While there, the boys learned from farmers that the metal used wouldn’t be locally available or affordable, and that a planting device made from bamboo or plastic would be cheaper and easier for them to maintain. Diarmuid and Jack also presented their project to students at Lilongwe University of Agriculture and Natural Resources, one of Malawi’s leading agriculture science colleges.

Proving that the Science for Development Award can have an impact long after school, Jack O’Connor, now a University of Limerick student, launched the seed planter as an Enactus project which was selected to represent Ireland at the Enactus World Cup in Silicon Valley in 2019. Now rebranded as Moyo Nua, the new prototype has been designed from bamboo, taking the advice of the Malawian farmers on board. In April 2019 the project won the inaugural “Peace Through Trade” competition hosted by The World Trade Centers Association Foundation (WTCAF) in Querétaro, Mexico where Jack and fellow UL student Catherine Hallinan presented his vision to 500 representatives from Member World Trade Centres from 91 countries.

The 2019 Science for Development Award winner is Seán Byrne from Avondale Community College, County Wicklow. Seán’s project explores the use of a low cost eggshell filtration system to remove heavy metal pollutants from water. The system has the added benefit of removing microplastics from the water at the same time. Seán and his teacher will travel to Zambia with Self Help Africa in early 2020 to field test the invention.
Find out more about the judging criteria for the Science for Development Award at BTYSTE on the Irish Aid website. Read about winning projects since 2006 on the Self Help Africa website.